Part 2: The necessity of oils

So in part 1, I explored research on why water is pretty much on crutches when used on its own as a moisturiser. In this part, I will now discuss one of three ways to make water more effective as a moisturiser. As suggested by many of you already in the first part, one of the most researched topics is the moisturizing effect of oils in hair. I realized that I had gone all scientific in my diagrams but since I am too lazy to revise I will just clarify here oil=lipid=fat (they are all the same thing really).

Now I will start by introducing a 'new' concept. It is only new because I haven't talked about it before. However since I'm now getting questions on ceramides, I think I have to introduce it.

There are two main types of oil in the hair. An internal oil which acts as a glue to stick the cuticle cells to each other. This oil is very hard to remove in normal circumstances (i.e washing or conditioning). However treating hair with an alkaline substance could affect it ( colour treating, bleaching or relaxing). The second oil is sebum which many of us will know about. It is an external oil which coats the outside of hair and is pretty easy to remove with shampoo. 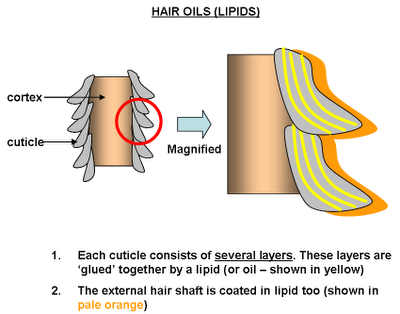 Oils in hair and skin have a key role in maintaining moisture. Hair is happy to take up water but it is equally happy to give it away. This is where oils come in and they perform in two main ways.

First they slow down water loss from the hair. Simply put they form a barrier preventing the water from escaping as fast. Water retained in hair = moisture success. 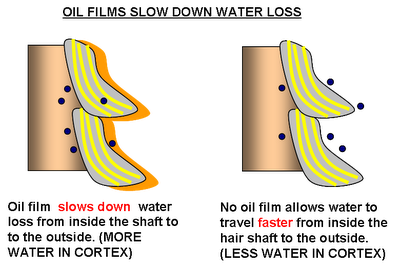 The second effect of water is to reduce the impact of the surrounding environment. Oil repels watermeaning water is much less likely to sit on the surface of the hair. This action slows down water uptake but do keep in mind that the hair WILL still take up water. The oil again just serves as a barrier which manages the exchange of water and research shows hair with oil does a much better job than hair with no oil. 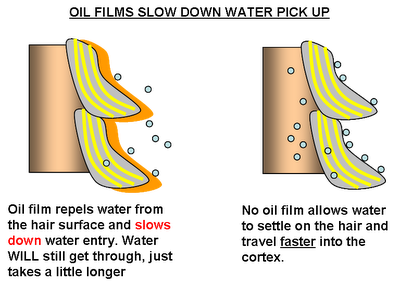